A father-and-son clockmaking business was originally established by Robert Piggin at Hoveton St John in Norfolk and was later moved to Norwich. It apparently ceased business when John died in 1856. A variety of products from their workshops survive, providing evidence of the firm, as do contemporary trade directories.

Peter Wharmby, the Nottinghamshire clock dealer, examined a longcase (grandfather) clock in 2003, which had the maker's name on the dial: 'Rob. PIGGIN HOVETON', and which he dated to the period 1780-1790.

The catalogue to the Bridewell Museum in Norwich describes a piece of work the museum holds by John Piggin. This treasure is a movement which Piggin inserted in a case by another watchmaker, presumably because the owner wished to continue using the watch after its original movement had worn out. The museum also holds a couple of repair slips inserted into a London watch when John Piggin was servicing it. The repair slips gives the addresses of his two Norwich shops as "John Piggin, Market Place, Norwich, also opposite Post Office."

Yet another of John's watches, this one made in 1830, was offered on an E-Bay auction ending 2008 April 6 by "fenpete", whose photographs are reproduced below with his kind permission. He described the watch as follows:

A single consular-cased verge watch by John Piggin of Norwich, case dated 1830. The case has one or two dents on the back; the engine turning is in good condition. As you can see, the winding is from the front. There is a hairline crack just above the winding hole. The hands are original. The movement ticks away to the end of the chain. The movement swings out of the case at 9 o'clock instead of the more usual 12 o'clock. 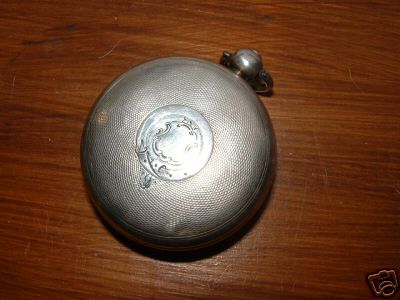 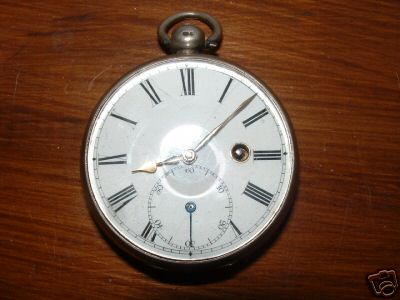 © Jean-Baptiste Piggin 2000-2009. This page may not be copied, published or placed online elsewhere without express permission from the author.